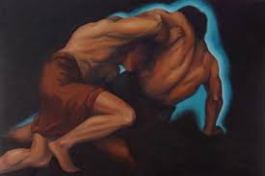 And Jacob was left on his own, and a man struggled with him till dawn broke.  He realized that he could not win, so he touched his hip socket, and Jacob’s hip was dislocated as he struggled with him.  He said, “Let me go, for the dawn has broken.” He said, “I shall not let you go, unless you bless me.”  He said to him, “What is your name?” and he replied, “Jacob.”  He said, “You shall no longer be called Jacob, but Israel, for you have struggled with God and with men and have overcome.”  So Jacob asked, “Tell me please your name.” He said, “Why do you ask my name?” Then he blessed him there.  So Jacob named that place Peniel, because “I have seen God face to face and yet my life was rescued.”

The passage starts with the words “And Jacob was left on his own”. When Jacob was on his own he gets into a struggle with a man until the dawn broke. Even in this struggle where Jacob gets his hip dislocated he demands to be blessed. Jacob is a character who would go to any extent to win a blessing. If he did not get it, he would steal it. Point blank he was asked the question “What is your name?” this was God asking Jacob his name? Dint he know it? God is asking him “Who are you, what is your name, what is your past?” Jacob who had cheated his father and deceived his brother had to be reconciled to God. He had to own up his past. He had to say his name is Jacob, he had to accept that he had cheated his father. He had out of greed stolen the right of his elder brother.  And then God changes his name, reconciles his past and gives him a new identity as Israel. He realizes God’s presence to name the place Peniel that reflects the grace of God in his life, that with all his shameful past, he is still alive. He is a new man. Man transformed by God. After God names him, he repents and goes and reconciles with his brother Esau in Genesis chapter 33. He gets first straight with God, and then with his brother.

Are we not like Jacob? Are we not on the run, fleeing from God and ourselves? We are like him, we want everything for ourselves, no matter what the cost. We are struggling with God. He asks you and me, “What is your name?” “Who are you?” “What is your past?” in the presence of God we need to own up our name, who we actually are, What is our past. This is the act of Confession. Coming as you are in front of the Lord. Repenting and accepting yourself owning up the shameful acts we do, the hypocritical lives we live and greed we have, to urge we have to fulfill all our needs even at the cost of our brothers, sisters and friends. God gives you a new name, makes you a new being, transforms your identity. Friends, it is important to come in the presence of the Lord and say “Lord I am wrong. I am leading a very shameful life. I am hiding from myself. I am fooling You O Lord. Forgive me”. Let the Lord heal you. You will have to discern his forgiveness and grace. Do not hide yourself. Come out and own up.

If one notices the Mar Thoma liturgy, we see that after the sermon we have the Sacrament of confession. In that confession we begin by saying “I confess that I have sinned against you, O Father, Son and Holy Spirit, in thought, word and deed. I am sorry with all my heart for these my sins……” He forgives those who truly repent, He gives them a new name. He calls them His children. And like Jacob after being forgiven by God and transformed by God went to reconcile with his brother. In the same way after the sacrament of confession, the second part of the service begins with the act of Kiss of Peace which indicates reconciliation with your brothers and sisters. Your confession is not just a hollow act, it has to be manifested in action, and you have to be a witness to the people around you. People will have to see the Peace of God in you.

One of my favorite hymns is “Amazing grace” written by a gentleman in 1779 by the name of John Newton. John Newton used to be a Sailor who used to sell young boys from Africa as slaves for huge profit in England. The lives of young boys from Africa were a matter of profit to him and he earned immensely. But there was guilt. This man that he sold was created in the image Of God. But he avoided heeding that voice. Then one day when he was alone in the sea and had a near death experience. He discerned the grace of the Lord and repented, owning up his sins. After this he wrote the beautiful hymn “Amazing Grace, how sweet the sound, that saved a wretch like me. I once was lost but now I am found, was blind but now I see.” He not only repented but also reconciled with his brothers who he sold for his profit as slaves. John Newton later became a priest and he crusaded against slavery and slave trade. He too got right with his Creator and reconciled himself to his brothers.

The Lord said to Moses,  “Tell Aaron and his sons, ‘This is how you are to bless the Israelites. Say to them:“ ‘“The Lord bless you and keep you; the Lord make his face shine on you  and be gracious to you; the Lord turn his face toward you and give you peace.”’

Everything is now at the tip of our fingers. We can make calls, we can chat through Whatsapp, we can access facebook, we can Tweet, we can mail and blog. We live in the age of Smarphones. Without sounding preachy let me admit that my wife gets really irritated seeing how hooked on I am to the phone. Whenever she has something to say, I am engrossed in the phone. I argue that “I am listening. I can tell everything that you just told me.” Even if it is true is that enough? Wherever we go the technology has become so intrusive that even if we are physically present among our friends and relatives, we have become absent. We exist in a parallel world. We can’t hold a proper conversation with people in front of us. We are caught up in checking who liked our photos and status updates.  It is the peril of advancement in communication that we have failed in the basic art of communication. That is to pay attention to the person or the people in front of us. The biggest evidence of love is when we give attention to people. Our attention is indirectly saying that “You are very important to me. What you are saying matters a lot.” What an affirmation. So not paying attention gives the contrary message even if we intend or not.

The passage we have in front of us is a Priestly Blessing taught by God himself. It reveals one of the greatest truths that I love. God pays attention to us. Look at it. “The Lord turn his face toward you.”(vs 26).  John Ortberg says that turning your face toward someone is to give your wholehearted, undivided attention. It is a statement where God is saying to us “I have nothing else to do. I am fully available for you. You are important to me.” What is more fascinating is “The Lord make his face shine upon you.”(vs 24) How wonderful. This blessing says God will not only turn his face towards us, he will make it “shine” on us. The shining face is an image of delight, a joy that we cannot describe. Now how do we understand a “shining face”?

Let me explain. My father by far is the best listener that I have come across. When people talk to him, he is all attention. My wife Soji is very animated in her conversations. I happened to witness a conversation between my dad and her. She was narrating an incident of great joy  and I could see my  father’s face shine. He owns the happiness of the person speaking to him. He makes his listeners feel very special. (No wonder Soji keeps asking me “How come you are like this!!!”) That is what the blessing says. God is so much involved in us that his face shines on us. We are very special to Him.

He listens to our prayers. It is important to Him. We matter to Him. When I was a teenager, I had a doubt. My question and confusion was when there are so many people around us, how is it possible for God to pay attention to each and every prayer. I asked my mother this question. She told me a story. “Once there was a man called Henry. His life was full of problems and he felt that God is not answering his prayers. He kept asking ‘When there are so many people in this world how is it possible for God to pay attention to every prayer?’ Disturbed, he walked out of his home to stroll on the beach. It was night and darkness had filled his heart. He saw no hope. The sound of the waves was symbolic of the struggles within him. But in the darkness there was a little light. The light was moon. He kept walking the length and breadth of the beach. And suddenly like a child he realized that wherever he was going the moon was right on top of his head. He started to run, the moon was following him. When he stopped the moon stopped. When he walked the moon was travelling above with him. Henry then danced and jumped. “If there are a million people standing on this beach tonight, everyone would say that the moon is on top of their head. I have found my answer. Similarly when millions and millions pray to God, they feel his presence and find God with them.” This story may be too simple but it helped me a lot. Let us be clear on one thing. We are important to God. He pays attention to us.

If the God of the universe has time for his creation, time to pay attention to them, to celebrate with them, what excuse do we have? Let us regulate the technology that we have to enhance relationships. Let the gadgets that we have help us build bonds and not weaken or break them. Let us vow not to fidget with our phones in presence of another human being. Nothing is more insulting. Let us set our priorities. Let us overcome our addiction of indulging in ourselves. Let us thank God for turning His face to us. Let us be people who have experienced that joy. After communicating with God, the face of Moses shone. When we meet our friends are they seeing our face shining? Mostly our faces are blank. We have no joy. Let us take time to take the Bible and pray, so that we see the face of God shining on us. Let us keep our gadgets away and look into the eyes of the people in front of us. Let us enjoy the beauty of conversations and relationships that God created us for. May God Bless Us.