It was time for the bi yearly cleaning of the compound of the Mar Thoma Church Community Centre in Guwahati. I called one of my friends who helped me by sending someone for the task. So today morning at 8 we had two men who had come to do the needful. I took them around the compound which thanks to the rains were in a very shabby condition. I knew the task in front of them was an arduous one. Out of them, one was more of the talkative kinds and the other the silent one. I handed them the equipment necessary for them and left to do my work.

After sometime I returned to meet them with some tea and banana. During this time I needed to break the ice. I asked their name. The one who was more of the talkative kinds, his name is Manoranjan Rabha. And the other one said he is Sameer Ali. Sameer Ali did not know Hindi at all and I do not understand Assamese. So I could only converse with Manoranjan. I asked him about his education. I sometimes really feel this is a very wrong question. The more I have asked this question the more it has embarrassed the people that have been subject to this question. Manoranjan replied with great enthusiasm. “Mai 12th tak padaa hu (I have studied till standard 12).” This was a big surprise. I could not ask more questions as they resumed their work. But somehow the standard 12 remained with me. There were many questions that were bursting out. After lunchtime I joined them in their work. This helped me to converse with Manoranjan as I wanted to just ask him questions in very natural settings of a conversation rather than a series of interrogation. So I told him where I was born and brought up and what I do. He was very fascinated to know that I am a priest. Then I started my set of questions. Manoranjan is from the district Tangla in Assam. He belongs to the Rabha tribe. He has 5 siblings of which he is the 3rd in ordinal position. Then I asked him “Tell me something about your school.” He replied “I studied in a Government School that was 80 kms from my home.” That distance shocked me. As an urban bred spoilt brat I felt dragging myself to a school bus for a distance of 4 kms was a big deal. For my parents I going to school by cycle was an adventure of Himalayan proportions. He said “Mai roj cycle chalake school jaata tha(I used to cycle everyday to school.)” If this was not enough he had to plough the field for 2 hours before going to school. “By the time I reached 11th standard the financial burden at my house started to get very acute. My father wanted me to stop the studies and earn but I loved to study. By the time I reached 12th standard I had to do a lot of extra work in the village to sustain myself. I started becoming irregular to school. Cycling everyday 80 kms, working in the field and doing manual labour left me with no time to study. And then I failed in 12th standard which gave my father enough reason to tell me to stop my studies.” The smile and sparkle on Manoranjan’s face is unmistakable. But then he said with some melancholy “Fatherji mai bahut padna chahtaa thaa lekin kya karu ghar ka haalat bahut kharaab thaa. (I wanted to study a lot but the poverty at home prevented me from doing so).” After a pause he said “Mujhe aaj bhi mauka mila to mai padungaa. (If I get an opportunity I will study.)” I did not know what to say. Felt it was too early to give my opinion or my judgment on that. With all the financial security that I have it is easy for me to wag my tongue by serving platitudes “Of course you should study further.” In between this time, Sameer and Manoranjan cleared up the weeds that had taken the proportion of a jungle. My contribution was a token plucking of some grass here and there, all an excuse to engage in the conversation. They went ahead to clear it and I went back to my room. By now I was completely overwhelmed and reflecting on our conversation. I shared his story thus far with my parents who are now visiting us, and my wife. They too were concerned about it. I knew I needed to know more. I just did not want this to be a case of curiosity. It had to be something more.

The work of Sameer and Manoranjan was impeccable. There were a lot of scorpions and loads of mosquitoes that they had to brave in clearing the rubbish in our compound. The task that started at 8 in the morning ended at around 6.30 in the evening. After washing up they came and had tea and biscuits with us. Manoranjan saw some of my books and said “Mujhe book padna bahut acchaa lagta hai. (I love to read books). Now we had something in common. “There are days when I have not had anything to eat. But that is fine. But there has been no day where I have not read books. I can live without food but I need to read books.” This actually stunned me. This man of 5 feet 2 inches tall was surprising me at every turn of events. Honestly as humans we search for common love and when you find it, the relation graduates from mere acquaintance. The common love for books propelled our relation. I got curious and asked him, “When do you read?” He replied “I come home at 8:30 in the evening.” Then before my uncle (Father’s brother with whom he shares the room) comes I cook. We have food together. My uncle sleeps and I keep reading till I sleep. At 3:30 every morning I  have to wake up to fill water. After filling the cans for an hour I again get time to read till I have to make something for the morning. Some or the other way I read and every month I spend a lot of money buying books and magazines” My respect for this young man started to sky rocket. After having tea I told Manoranjan that I will drop him home. He was not ready for that but I insisted. He lives very close to my parsonage. It is called Uzan Bazaar which is very close to the banks of the Brahmaputra River. When we reached there I was expecting it to be a concrete room. One more naivety of mine was exposed. It was a bamboo thatched hut with tin roof. When he opened the door there was hardly any space in. The hut was of 12 foot by 12 foot dimensions. There was a small bulb hanging down the roof with innumerable wires .There was also bed and stove at very close quarters. I had by now become brave with stupid questions “Fan nahi hai (There is no fan)?” For me I cannot imagine sitting or sleeping without fan. He smiled and showed me a book that he uses to fan himself. Then there was something strange as to the walls there were papers stuck with beautiful handwriting. Pointing at it I asked him without any words what it is. He said “I love to write. I write small poems in my Rabha dialect and also in Assamese.” There is another thing that we had in common. I have no illusions about my writing skills but I too know that I love writing. The aspect of writing opened new dimensions in our relations. But there is more to come. He then said “I love writing short stories. I have written some in Assamese and some in my own tongue. I love telling stories. Mujhe bahut khushi milti hai (I get great happiness).” He also told me that he writes mostly early in the mornings as thoughts are fresh and there is no disturbance. I had called him the next day to my parsonage for some work. But before leaving I went to a shop nearby and bought a book where he could write his poems and stories. He refused to take it. I said “It is a gift of a friend who loves people who write. Who knows one day you may become a great writer.”

Photo of the poem written by Manoranjan 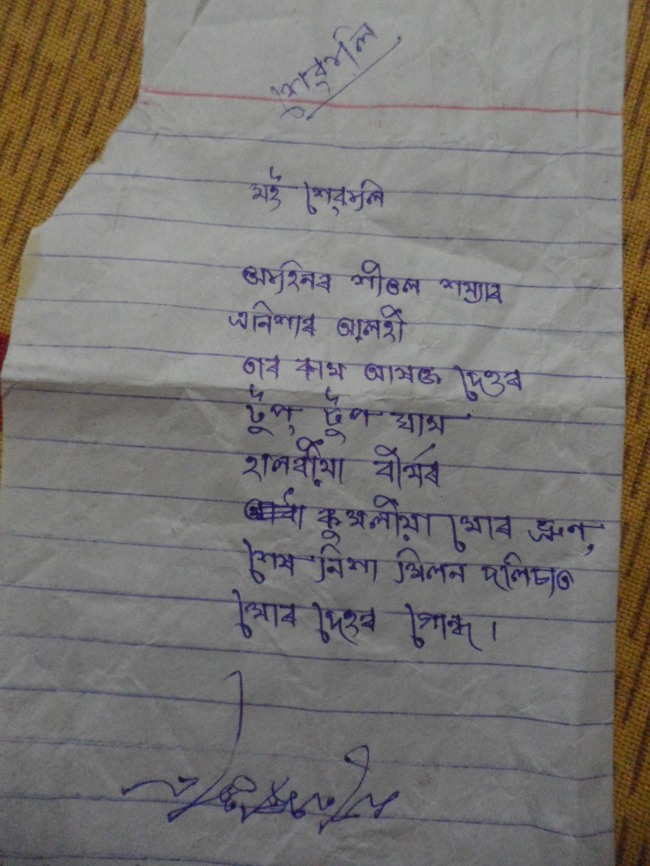