The prophecy that Habakkuk the prophet received.

How long, Lord, must I call for help,     but you do not listen? Or cry out to you, “Violence!”     but you do not save?  Why do you make me look at injustice?    Why do you tolerate wrongdoing? Destruction and violence are before me;     there is strife, and conflict abounds. Therefore the law is paralyzed,     and justice never prevails. The wicked hem in the righteous,   so that justice is perverted.

Today’s newspaper was really depressing. J. Jayalalitha is acquitted of charges of amassing inappropriate assets.I remember reading a tweet ” Since Jayalalitha was declared innocent Tamil Nadu celebrates “Mother’s Day” on Monday instead of the official May 2nd Sunday”.  Salman Khan gets a quickfire bail. Ramalinga Raju of Satyam, who was caught in a big fraud, is granted bail. As my friend Rev Prince Varghese who is famous for his wit and sharp analysis wrote this as his Facebook status.

It is the general feeling that one gets looking all around where common man sees travesty and mockery of Justice. Recently youths of the Bethel Mar Thoma Church visited the Central Jail of Bhopal on Easter. The list of undertrials, whose guilt has not be proven by court but are in jail is a long one. One undertrail was there for last 4 years. So the common man, if he is innocent, he still is behind the bars for 4 years and the powerful get instant bail and VIP facilities. As another of my friend Mr A.J. Philip said “From J. Jayalalitha to Narendra Modi, all our politicians are innocent according to the court and therefore we are blessed to have such innocent politicians.”

As we had the discussion of Salman Khan Case in our Youth meet, the debate of justice became prominent. One of our members Mr. Jacob John, very well pointed out that in Indian Judiciary Justice is not a right but a commodity to be purchased. If you have money and can appoint the best lawyer, then the proceedings are dependent on the debating skills of the Lawyer who will make even make Hitler look like a saint. While prosecution lawyer, appointed by the state does not stand a chance in the court. When we start to even talk of Witness protection in the face of many witnesses turning hostile, the Indian system of witness protection is nearly absent.

In light of the really bleak and depressing scenario let us look at the Biblical passage. As a youth I hardly knew there was book called Habakkuk and sure I never bothered to read it. But in the above context this book is very relevant as it shows us a believer struggling with injustice, suffering of innocent and sadness. It’s a dark time for God’s people. Where is God in this? What is God doing in this? Is He indifferent? Does He not care? Why are my prayers unanswered? How do I come to God with it all? The book shows us how to dialogue with God in our suffering, how to trust God even when everything is falling apart and how the Gospel connects all the dots in between and gives us courage. So what exactly is Habakkuk doing here? Is he complaining? Well to be more accurate, he is lamenting. So what is a Lament?

“Lament is not about getting things off your chest. It’s about casting your anxieties upon God, and trusting him with them. Mere complaining indicates a lack of intimacy with God. Because lament is a form of prayer, lament transforms our cries and complaints into worship. Walter Brueggemann says that undergirding biblical lament is “a relationship between the lamenter and his God that is close and deep enough for the protester to speak in imperatives, addressing God as ‘you’ and reminding him of his covenantal promises.” Anyone can complain, and practically everyone does. Christians can lament. They can talk to God about their condition and ask him to change things because they have a relationship with him. To lament is to be utterly honest before a God whom our faith tells us we can trust. Biblical lament affirms that suffering is real and spiritually significant, but not hopeless. In his mercy, our God has given us a form of language that bends his ear and pulls his heart.”

“Why do you make me look at injustice?  Why do you tolerate wrongdoing? Destruction and violence are before me; there is strife, and conflict abounds.  Therefore the law is paralyzed,   and justice never prevails. The wicked hem in the righteous,   so that justice is perverted.”

The cry of Habakkuk or his laments are just so apt for you and me. This is the sense of helplessness that the common man faces and this is really the reason why we love Salman Khan. Bollywood is our biggest anesthesia against of all these gross injustice. We love the angry young man who takes on the system, 1 Chulbul Pandey who punishes many rogues. We feel the vicarious fulfillment of beating up the bad guys in real life when we see the Reel Salman do it time and again on the screen. Therefore it was not surprising to read the tweets of injustice done to good boy Salman who is “Being Human”. He does charity, so why bother if he kills Nurullah Sharif, a stupid pavement dweller who is stupid to sleep on the footpath like a dog. Why bother if 4 other youths were maimed for life. Footpaths are not for sleeping but it sure is for driving.

Now as a man of faith, as a priest how do I confront this problem? Where is God in all this? Habakkuk tells me to stop saying comfortable dialogues like “God has a plan”. What plan? Habakkuk has the audacity to stand up and question God. He has the guts to argue with God. He is protesting and shaking his fist against the Lord. In times where our prayers have turned very polite and courteous, we have forgotten our right to lament. To argue, to question God. Let us not medicate ourselves by looking the otherway. Let us struggle with God like Jacob did and let us resolve not to leave him unless we get a Blessing in form of an answer. The pursuit for justice is cut short when we settle down for easy answers. 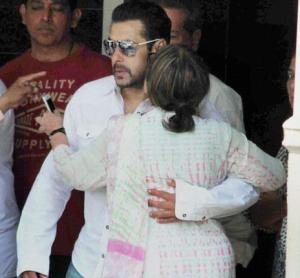 “It is important for us to read the conversation between Jesus and his disciples about faith as recorded in the gospel of Luke along with the book of Habakkuk (Luke 17: 5-6). The disciples asked Jesus to increase their faith. But Jesus replied, “If you have faith as a grain of mustard seed, you could say to this sycamore tree, be uprooted and planted in the sea, and it would obey you.” A sycamore tree is a large tree up to 60 feet height with deep roots. The parallels of this text in Mathew and Mark talk about the moving of mountain by faith. So Jesus juxtaposes here a mustard seed and a sycamore tree to convince the disciples the power of faith to move mountains. The conversation narrated here started with a request from the disciples to increase their faith. But Jesus’ diagnosis was different. For him, what they needed was not more faith; but a different understanding of faith. Then he explained the illogical logic of a faith like mustard seed moving mountains. Jesus used the metaphor of the mustard seed to articulate the logic of the Reign of God as we read in Mark 4:30: “With what can we compare the kingdom of God? It is like a mustard seed, which, when sown upon the ground, is the smallest of all seeds on earth, yet when it is sown it grows up and becomes the greatest of all shrubs, and puts forth large branches, so that the birds of the air can make nests in its shade.” Those of us who are familiar with mustard plants know that this is a silly example. But that is the mystery of faith. When the vulnerable, the weak, and the underdogs assume the historical agency, even mountains are in trouble. This is the absurd logic of Christian faith. Mustard seeds moving mountains. Davids defeating Goliaths. Communities of faith turning the world upside down… So Jesus’ prescription for the disciples was not to strive for more faith in a quantitative sense; rather to grasp the absurd logic of faith and be possessed by it. The righteous shall live by faith.”

So when I am about to end this, I do not have a clear answer. I am confused, angry, helpless, ambiguous, pained and at times feel everything is pointless. But I will try not to medicate it or suppress it. I will try to struggle if I believe in justice as much in practice as much as I preach. Let me introduce you to a person I met when I was in Guwahati when I was attending a Conference on Globalization conducted by North East Social Research  Centre (NESRC).  I got to know her even more over a conversation at the Dining table during the Lunch break. Her name is Sister Mary Scaria. She told me “I was a teacher. I love teaching. My turning point came when one of my tribal students was raped. This disturbed my conscience. I was deeply troubled. The accused were  scot free. I had to do something. I just could not be a spectator. That is when I decided to enroll myself for law.” Today Sr Mary Scaria is an Advocate with the Supreme Court. She champions the cause of women who face atrocities. Her clients are those who cannot afford legal aid. She encountered an event in her life that caused immense pain. She chose to be hurt. She chose to question.  She decided to be a tiny mustard seed that looks insignificant in front of the powerful mountain.  Martin Luther King Jr said it well “Our Lives begin to end when we become silent about things that matter.”